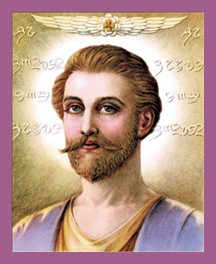 Ascended Master Saint Germain is the Chohan of God's Violet Ray of Freedom, Mercy, and Transmutation.

"Place the Violet Flame through your heart and then let go and know who you are."

"You know of the Violet Flame. You know of your God Presence, and you know My Flame. Move into action. Take up the Sword. Allow for your calls to go forth to the Violet Flame, to release the planet from all of the burdens, all of the overlays of the astral and the psychic plane. Allow for the Freedom to come to the elemental kingdom. The burden alone that the elementals have carried for the lifestreams upon the planet is great. You should feel a sense of responsibility to lift that burden with your calls.

"Allow for all that is of the human to dissolve into a total surrender into your Holy Christ Self, and then into your God Presence. Approach the altar with the intent and desire of communion with your God Presence - in Harmony with the expectation of the Love that will be released, and you lay all of your burdens aside. Place them physically on the altar if you must go through the exercise. You could even have a little box, not unlike Pandora's box, that you place all the ills of your life. Put the lid on it so that it's 'over there' - then enter into the Flame.

"You have nothing to lose. If you choose to pick up your human ego outside the sanctuary door, it will still be there - because you can recreate it. It is in your memory body. Or you can put it into the Flame and see what is left. I think you will be most surprised. For if you have been a most sincere student on the Path for many lifetimes, you will discover that not all was transmuted, not all went into the Flame and was no more. For lo and behold, you will turn around and discover that many of those aspects of you - that you thought perhaps might have been the human ego and the human pride, might have been the human creation - were, in fact, not at all - but the expression of your own God Presence already manifesting into the physical. But because there is such a fear of the surrender and the letting go, many do not ever get to the point of feeling the fullness of that Release and the Oneness with their God Presence.

"This is the Opportunity for Happiness, beloved ones. And I, Saint Germain, wish each and every one the fullness of Joy in living. For it should not be a drudgery, a depression, or a state of illness. And even when there is the physical outpicturing of this or that - that may not measure up to what you think is Perfection - it matters not. For the Flame, beloved ones, that is on your heart, that connects you with your God Presence and buoys you up into the fullness of that Light is all that matters.

"For you cannot take it all with you. Why would you wish to? You can even, beloved hearts, take the physical body with you, if you choose. There have been Those who have. But should you elect to leave part of it behind, to go back to the dust, you have that prerogative. It is no longer necessary to take the physical body with you in the Ascension.

"Do not be afraid. Do not sense the loss of something that is not Real, but allow yourself to step forward into the Flame that you invoke at your own private altar as an exercise of preparation for all of the Flames of God Quality that you will experience on your way to the Ascension.

"It is Cosmic Law. It is a Science. And one day the Earth's scientists will wake up to how it all works. There are some, even today, that are beginning to question more and more, and find that the ways of the world and the outer intellect become confounded and they cannot explain all into the terms of esoterics. 'It is a mystery' indeed. But you, as Ascended Master students, know the Mysteries. You know the Light, and you know who you are. Recognize it. Become it, and expand it to others.

"This is My Message. This is the Desire of My Heart: that each of you exhibit the fullness of the Opportunity that is afforded you to become the Christed One, to walk in the Light of the Christ. And then take My Message and run with It. Collect together, do not put It, My Message, on the shelf, but put It on the altar and let It expand, and let the Fires of the Heart of your own God Presence bring into the fullness of your own life the Power, the Wisdom, and the Love of God, and all good things will come into your life. There will be a greater Abundance of Light than you will be able to keep in your members. You will be required to give It back to God in a figure eight flow, or to release It to others and to God in Life. You will not be able to contain It. And guess what? The more you give the more you will receive, until one day you will go spinning out of control right into the Ascension and you will not even know that you are there. It matters not where you are on the Path. It matters what you are doing on the Path. For there are victories and accomplishments each and every day that are joys to experience.

"Lighten the heart. Place a smile on your face and in your eyes, and know that you will truly be expressing the Smile and Twinkle of the Eye of your own God Presence right where you are in the physical. For that is the expression that exists at that Level of God Reality.

"I AM Grateful for your attention, and I understand the dilemma that some are in. Think not I am unaware. But trust, each and every one of you, the heart. Place the Violet Flame through your heart and then let go, and know who you are. That is My requirement as the Knight Commander, and the Directive for this next cycle.

"Yes, beloved ones, We are entering into an Age when you will see Me far more than you have ever seen Me in the past. For I AM directly involved in the affairs of the expansion of the Light for this next two thousand year cycle, and I will be in attendance wherever there are those who say they are students of the Light and are earnest and pure with that intent. But mark well, it must be of pure intent. For I do not have time to dally with anything that is less than the God Reality that will take Us into the Golden Age. There is no game playing. For the Dispensations are on the table. The Opportunity has been afforded, and the cycles are now to move into action to let the Earth know that Saint Germain is ready for the Golden Age, and ready to bring up those Christed individuals into the fullness of their God Presence.

"As you move forward, day to day, week, month, and lifetime, do not neglect the Flame on your heart. Should you elect at any time to move away from the active work of the Ascended Masters, I charge well that you will remember My Words, that you are required to maintain the Flame where ere you go, for the connection with My Heart will not be severed. For you are, beloved ones, too precious and too dear to be allowed to slip away in the night and pretend that I, Saint Germain, did never exist in your life.

"Allow for the Violet Flame that I have released this night to move through your bodies, to transmute all of the tensions of the solar plexus, and allow for the integration of your heart with your own God Presence. And be of Joy and Happiness to know that you have a God Presence that looks after you, that adores you, that is who you are. . . . "

The Story of the Godhead Charioteers