Amerissis, the Goddess of Light

"There is a Joy that you have never experienced, to your recollection, since being a child!" 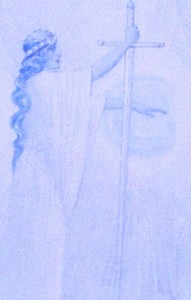 "You are Light. I AM Light. All Earth will be Light - for We will bring Light to every darkness, Light to every miscreation. For I AM Light, and the Sword Excalibur that I bring to you will help to bring about the quickening of the Fire that is necessary for each of you to perform the work of the Magic. Yes the Magic, the Eye-Magic of Light. For the Light, beloved ones, will heal, will mend, will bring the Abundance that you desire.

"With the Sword Excalibur you will have the necessary tool to surgically remove from the heart all that is there that does not belong. Since you as a child walked through all of the relationships, all of the mishaps, all of the loves, all of the discouragements of the process of learning, you applied the Electrons of Light to all manner of unreality. The hurt that you have felt, fed your Electrons of Light into, and sutured to the heart -- you made a part of the heart, allowing it to rest and stay.

"As you came across the next stumbling block, you repeated it, and again and again until, before you were aware, the heart was as a barnacle covered tug - unable to move through the waters of the feeling world without disturbing or rippling the water. For you see, beloved ones, when the heart is pure, when the heart is open, it does not cause discomfort. It does not cause anger. It does not cause mistrust. It moves through the emotional plane of each one's aura with the smooth silky feel that is as sharp as the razor's edge - just like the Sword Excalibur.

"The Light from Excalibur is able to disengage those 'barnacles' one by one, but you must be willing to allow them to go, to allow them to wash down the stream into the Lake of the Violet Flame. It is not enough to know they exist. It is not enough to have dissected all aspects of the "barnacle". You need not know its size, its dimension, its color. You need not know how long it has been there. But what you do need is for the Light to move into Action, and once and for all clear the heart.

"My Flame is the White Fire. The Complement to My White Fire is the Blue Fire. When you call forth Light from the White Fire / Blue Fire Sun, and invoke Excalibur, by the Power invested in that Blue Flame and by the Precision and Purity of the Light of the White Fire, you are able to once and for all 'clear the deck', so that you are able to move freely on the screen of the Divine Plan for your lifestream.

"Each day that goes by, each week and each month that you do not perform the necessary surgery, you will find that the 'barnacles' grow. And as they grow, they become stronger and more entrenched in their home that they have made.

"There are many lifestreams who will go from one embodiment to the next carrying those 'barnacles' with them in the memory body. Those 'barnacles' will be brought out at given times when there is a similar record.

"It is true. Many have forgotten how to trust the heart. For they have made many errors in discernmnt because of the old 'barnacles' in the memory body reacting instead of being transmuted, instead of being placed in the Sea of Violet Flame where they would be no more.

"As you have walked your Path, there have been many lifestreams that have come in touch with your heart. But how many have actually felt the Heart of your Life? Can you honestly say that there are those who honestly know what is in your heart? Have you mused upon the concept that no one knows you, that you are misunderstood, that your intention was different than perceived? Could it be the 'barnacles'? Could it be the records that have been so in the front of your consciousness - vibrating through your feeling world and the emotional body - that this is what your co-workers on the Path have perceived? If you continue to hear a resounding confirmation, time and time again, of a certain pattern, do you not think it would be wise to investigate the emanation of your aura - to consider that you are not giving enough Violet Flame?

"It is possible, beloved ones, that with application to the Violet Flame daily, your aura can be so filled with the Violet Flame, that even the remaining 'barnacles' that need work will not be perceived. For those lifestreams that you come in contact with, those other records, those riptides, those energy fields that would normally have caused a tornado or a hurricane in your emotional body, will not be able to touch even the 'barnacles'.

"As you continue to give that Violet Flame and apply the Sword Excalibur with Its precision accuracy, you will be able to release one by one each of the 'barnacles' - till one morning you will wake and you will find that it is a New Day. You are breathing freely. There is no sense of struggle in stepping forward into the activities of the day. There is a Joy that you have never experienced, to your recollection, since being a child! . . . "